Rival Sons With Special Guests The War and Treaty 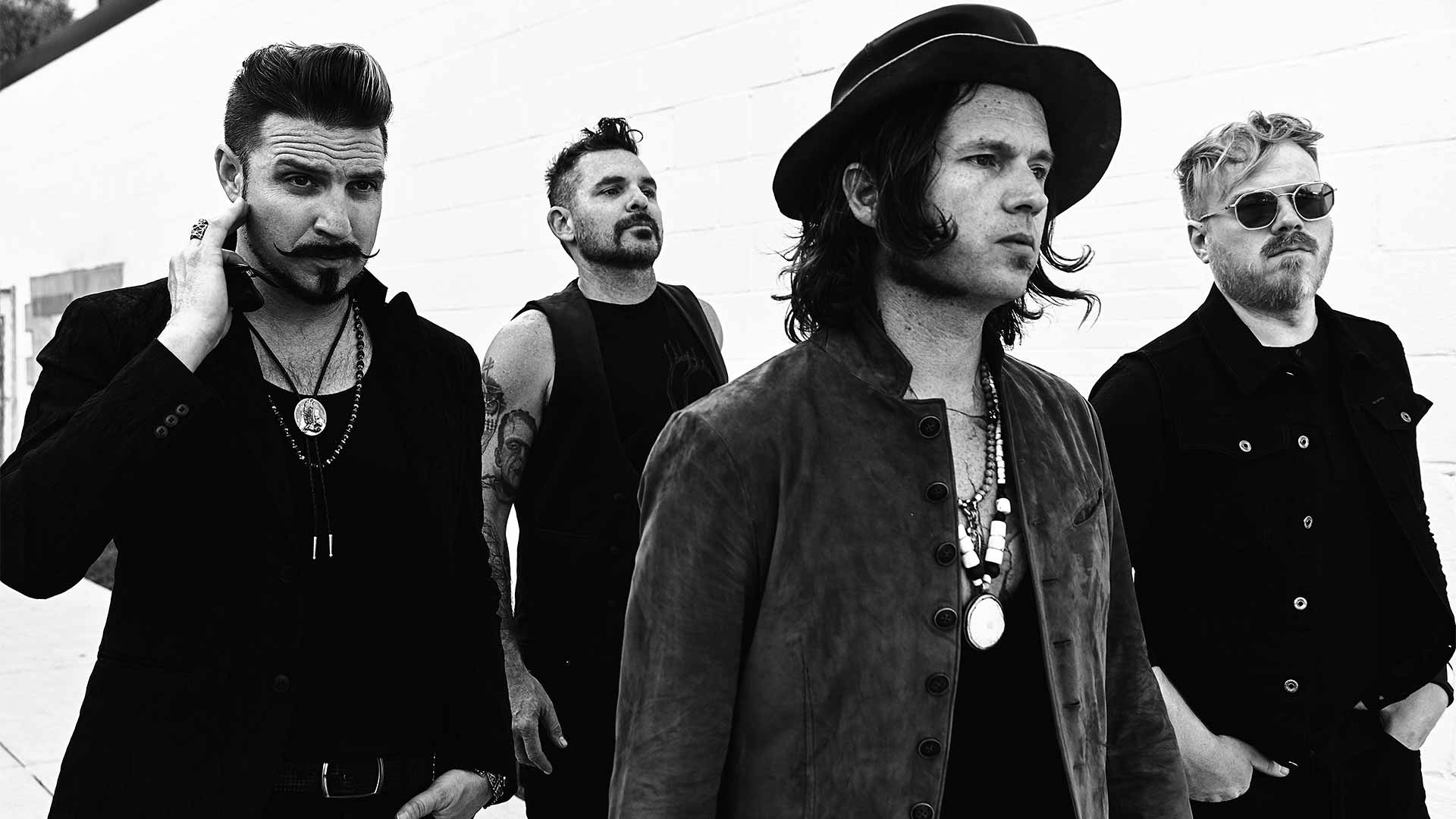 When they first began writing for their new album, Feral Roots, Rival Sons vocalist Jay Buchanan and guitarist Scott Holiday holed up for a week in a bare-bones shack just off the historic Natchez Trace. There, in the lavishly overgrown wilderness of the South Tennessee woods, they bore the genesis of Rival Sons’ new full-length Album. For the Long Beach, California band’s debut for Low Country Sound/Atlantic Records—Feral Roots echoes its origins with a sound and spirit both thrillingly untamed and iwildly majestic.

For Rival Sons, the primal intensity of Feral Roots reflects a certain unrest at the heart of the album. “I’m working to reconcile my dirt-road DNA with our growing dependency on technology and the over-communication that comes with that.” says Buchanan, whose bandmates also include drummer Michael Miley and bassist Dave Beste. “We’re surrounded by and are subordinate to our own creation; I looked to the undomesticated nature that lies dormant beneath our civil choreography, to what created us.” But with its nuanced explorations of both the wild and the domestic struggles of love and truth, Feral Roots ultimately argues for pushing beyond pure survival instincts and striving for something more exalted: to reclaim a long diluted genre with a galvanizing return to form.

Produced by Rival Sons’ longtime collaborator, Dave Cobb (the Grammy Award-winner known for his work with such artists as Jason Isbell, Chris Stapleton, John Prine and Brandi Carlile), Feral Roots came to life at Nashville’s famed RCA Studio A and at the iconic Muscle Shoals Sound Studio in Alabama. In a departure from the off-the-cuff creativity that sparked their previous albums, however, Rival Sons immersed themselves in a far more gradual and measured writing process for Feral Roots. “In the past we’ve made records where we come off the road and go right into the studio after the last gig, but for this one we allowed ourselves more time to focus,” says Holiday. Despite its sprawling arrangements and shapeshifting textures, the album still bears a brutal vitality deeply rooted in Rival Sons’ on-spot recording approach.

For over seven months, the two bandleaders met up for several more writing sessions and also collaborated remotely, with Holiday based in Huntington Beach and Buchanan now living in Franklin, Tennessee. “That was a huge part of the dialogue between Scott and I as we were writing—Scott being right by the ocean, and me being out in the wilderness. It was a convergence, with our different environments and separate narratives intersecting then overlapping so kinetically.” Buchanan notes. Another major catalyst for introspection: Buchanan’s move to a house in the countryside, a nearly-60-year-old home he’s renovating himself. “I grew up in the mountains and I’ve waited my whole adult life to get back to the woods,” he says. “It was a cathartic return to form for me which absolutely instilled the whole return to form aspect of the record.”

The interplay between self-examination and raw outpouring builds a powerful tension on Feral Roots, one that propels Rival Sons far upstream from their contemporaries. Opening track “Do Your Worst” comes on with a furious urgency—all massive riffs and howling vocals, savage drumming and thudding bass—with songs like “Stood By Me” delivering a juke-joint grind while “Look Away” unfolds in a scorching social commentary over Holiday’s iconic guitar anthem.

One of the most blistering moments on Feral Roots, “Too Bad” casts a wicked spell with its brooding rhythm and piercing lyrics. And on the album’s title track, with its mesmeric guitar work and captivating vocal performance, Rival Sons channel a quiet wonder at the fragile grandeur of a world strongly felt but seldom seen. “Even peripherally, once you’ve glanced at the mystic in the mundane, you can’t unsee it.” Buchanan says.

On “All Directions,” Feral Roots reaches a glorious fever pitch, a lyrically transcendent and dynamically epic journey equally driven by ethereal harmonies and scorching guitar riffs. With its unbridled energy and full-hearted gospel choir harmonies, “Shooting Stars” presents an even more pointedly hopeful meditation on creating your own strange magic, closing out Feral Roots with a defiant burst of joyful noise. “The archetype of the suffering and self-destructive artist is so rampant and played out,” says Buchanan. “I used to live in a mansion there, until I burned it to the ground so I couldn’t return. This song was written with those ashes.”

Throughout Feral Roots, Rival Sons continually play off the clashing elements of their musicality, a force that’s long guided the band. Formed in Long Beach in 2008, Rival Sons put out their debut album Before the Fire in 2009 and made their breakthrough with 2011’s Pressure & Time then again in 2014 with Great Western Valkyrie, their entire catalog to date produced by Cobb. Over the years, the band has steadfastly forged their own singular path through the music industry, touring with legends like The Rolling Stones, Guns N Roses, Black Sabbath and AC/DC while introducing their thoughtfully hell-raising sensibilities into the rock & roll canon.

As Rival Sons’ most artful and deliberately crafted album to date, Feral Roots finds the band pushing both buttons and boundaries to emerge with a greater focus and possession than ever before. “Rock’n’Roll is a keystone in our cultural identity and you can see, hear, and feel it gathering speed everywhere you look. It’s about to break wide open.” says Holiday. With Feral Roots, Rival Sons have pushed the needle over the limit line in what is a clear call to arms and an unflinching return to form for both the genre and it’s fans worldwide.